Editor’s Note: This essay is the second in a two-part series on Descartes’ Meditations. The first essay is here.

4. Meditation 4: The Source of Human Error

Descartes argued in Meditation 3 that since God exists, most of his beliefs are true, even those that aren’t clearly and distinctly (hereafter C&D) perceived, since God wouldn’t allow him to be routinely deceived. But of course he sometimes is in error.[1] The problem is to account for his errors of judgment without assuming that his ability to judge is hopelessly defective.

Descartes solves this problem by arguing that whenever he makes an error in judgment it’s not God’s fault, but his own: he has the ability to believe something even where there isn’t sufficient evidence. Judging involves both the intellect (the ability to know) and the will (the ability to choose). However, the will can easily be abused. For while his intellect is limited (it lacks C&D perceptions of many things),[2] his will is not limited (it can affirm and deny even on the basis of insufficient evidence). The best course of action in such cases is to simply abstain from judging. God is hardly to blame for such error; rather, it’s the misuse of our wills. 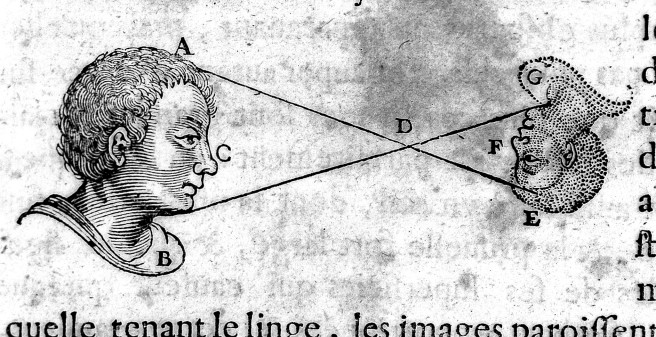 5. Meditation 5: The Essence of Physical Things

Descartes then defends a theory of “essences” that is intended to provide a foundation for scientific research. He has many ideas of things (that may or may not exist outside his mind); however, they are not his invention but have their own true and unchangeable essences. E.g., he imagines a triangle (which may or may not exist) but does not the triangle of his “mind’s eye” have an essence that is true and unchangeable? Importantly, it is not invented by him. Every triangle he imagines will necessarily share certain properties; e.g., its 3 angles will equal 2 right angles.[3]

This provides Descartes with a second proof for God’s existence. For his discovery about essences applies not only to the objects of mathematics and geometry, but also to anything—even God. As long as he C&D perceives a property of God, that property must actually belong to God. One of those properties is existence; therefore, God exists.[4] This is Descartes’ ontological argument for God’s existence.

6. Meditation 6: The Existence of Physical Things and Substance Dualism

All that remains, for Descartes, is to demonstrate that the external world of physical things exists and that the mind[5] and body are independent substances, capable of existing without the other.

Descartes argues that it is possible that physical things exist. Since he C&D perceives the true and unchangeable essence of physical things (extension, divisibility, etc.), he infers that there is some reason to believe that there are things that actually possess this essence.

But what is Descartes’ proof of the existence of physical things? He speaks of the ideas that seem to come from his senses. For instance, he has a head, hand, and all the things that make up his body, and perceives pain and pleasure in his body. He perceives heat, texture, light, sound. All of these things help him to distinguish the sky, the earth, and all bodies from one another.

Now, it makes sense that his sensory ideas were caused by things distinct from his own thought, since his experience is that these ideas were not controlled by him and were very “lively and vivid.” That is, his ideas were produced by bodies existing outside of him.

Descartes next argues that mind and body are really distinct things:

This provides the foundation for his unique brand of substance dualism, sometimes called “Cartesian Dualism.”

Descartes claims that his mind is not in control of his body the way that a sailor is in control of a ship. The mind/body union is deeper. But how can the mind and body causally interact or be unified in a “deep” way if minds are really distinct from bodies?[7]

Descartes replies to this objection in a couple of ways.[8] First, the brain is the interface between mind and body, and perhaps within the brain it is the pineal gland.[9] Second is an argument by analogy. We know that magnetism actually occurs: oppositely charged particles attract. But what is it exactly about oppositely charged particles that causes this attraction? We know that magnetism occurs, but we really can’t explain how it does—just as we know that the mind and body interact, but cannot fully explain how.[10]

This essay is the second in a two-part series on Descartes’ Meditations. The first essay, Meditations 1-3, is here.

[1] Descartes says that his errors—making false judgments—are the only evidence of imperfection in himself. What about hate, rage, and the like? It turns out, however, that for Descartes, much like the Stoics, such emotions stem from errors in reasoning.

[2] Descartes tells us not to blame God for our finiteness: there is no reason why God should “place in a single one of his creatures all the perfections which he can place in others”—spread out the perfections, so to speak.

[3] This is true not just of triangles, he continues, but any other shape, for example, a chiliagon (a 1000-sided figure). He has probably never encountered a chiliagon through his senses, but he can demonstrate certain properties of a rhombus. And he knows that these properties are certainly true, since he clearly and distinctly perceives them. Pictured is an enneadecagon (19-sided figure).

[4] Echoing St. Anselm of Canterbury (1033-1109), Descartes insists that he has a clear and distinct perception that existence is part of God’s true and unchangeable essence. Spelled out, his argument looks like this:

On the basis of this argument, Descartes says he is just as certain of God’s existence as he is that the sum of the interior angles of a triangle is 180 degrees or that a mountain must have a valley. See “The Ontological Argument for the Existence of God” by Andrew Chapman.

[5] Descartes makes no distinction between the mind (l’esprit or mens) and the soul (l’âme or anima) in his discussion of the mind-body relation.

[7] This is the principal objection to Cartesian Dualism then and now. In an extended correspondence with Descartes, Princess Elisabeth of Bohemia (1618–1680) challenged him on the relation between mind and body, particularly the kind of union they’re supposed to have and the possibility of their causal interaction.

[8] Neither reply occurs in the Meditations themselves. The pineal gland is discussed in the Treatise on Man (before 1637), The Passions of the Soul (1649), and in various correspondence. The magnetism analogy occurs in the Principles of Philosophy (1644) and in correspondence. See Descartes: The World and Other Writings, ed. Stephen Gaukroger (Cambridge, 1998).

[9] Only in the 1960s did scientists discover what purpose the pineal gland serves. Or at least one of its purposes: to produce melatonin. Interestingly, in the latest Gray’s Anatomy it says that it’s still unclear as to the extent of the pineal gland’s function. See Lokhorst, Gert-Jan, “Descartes and the Pineal Gland”, The Stanford Encyclopedia of Philosophy (Winter 2017 Edition), Edward N. Zalta (ed.), URL = <https://plato.stanford.edu/archives/win2017/entries/pineal-gland >.

[10] Neither reply has proven to have much traction. The pineal gland, although located in the right place and not fully understood, is still a body. The problem with the magnetism analogy is that though we have a legitimate alternative explanation of mental activity without reference to an immaterial substance, we don’t have competing explanations when it comes to magnetism.

[11] Such scientific questions are addressed in his Treatise on Man, The World, Description of the Human Body, Optics, Principles of Philosophy, and The Passions of the Soul. See Descartes: The World and Other Writings, ed. Stephen Gaukroger (Cambridge, 1998).

Shapiro, Lisa. Ed. and trans. The Correspondence between Princess Elisabeth of Bohemia and René Descartes (University of Chicago Press, 2007).

The Ontological Argument for the Existence of God by Andrew Chapman

Philosophy and Its Contrast with Science by Thomas Metcalf