1000-Word Philosophy: An Introductory Anthology is seeking experienced philosophy instructors to develop introductory teaching essays on topics of current and urgent social, ethical, and political interest in the United States.

We expect that most, if not all, of these essays will be included in the Philosophy of Race category, as well as Social and Political Philosophy and Ethics.

1000 Word Philosophy has been seeking essays on these issues for a long time now, and wanted to make this interest known again. Instead of developing a list of potential topics, we are asking instructors this:

1000-Word Philosophy’s essays are of a unique genre in that its articles are not argumentative: they are introductory overviews that inform and inspire critical discussion: they are an effective first step towards engaging deeper, often argumentative, sources. It must be acknowledged though that although 1000-Word Philosophy’s essays are not argumentative (in a sense that there is nothing like “I will argue that p”), they are also not neutral: they acknowledge and build upon reasonable agreements and informed and fair-minded consensus.

For more information about 1000-Word Philosophy, and important submission guidelines, please see www.1000WordPhilosophy.com And please contact the editors at 1000WordPhilosophy@gmail.com with any questions, to discuss any potential essay ideas and for suggested topics. 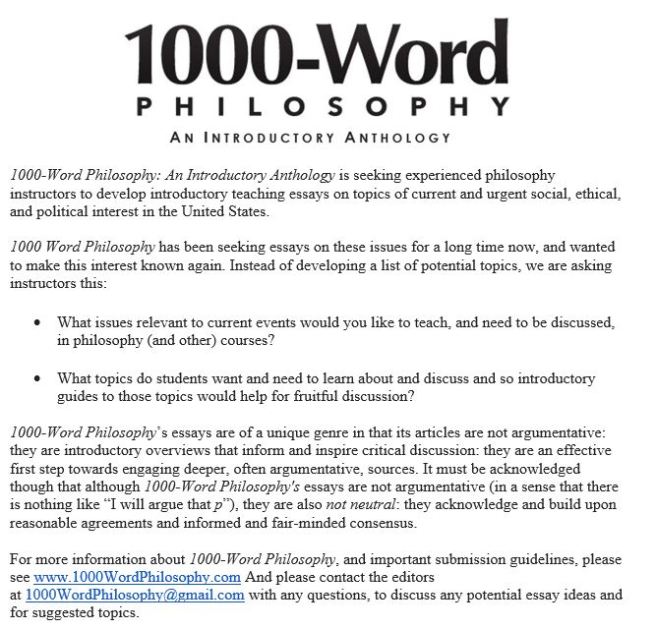 Here is the current main set of relevant essays that we wish to expand on:

Ethics and the Expected Consequences of Voting by Thomas Metcalf

Plato’s Crito: When should we break the law? by Spencer Case