Hannah Arendt (1906-1975), born in Hanover, Germany, was a public intellectual, refugee, and observer of European and American politics. She is especially known for her interpretation of the events that led to the rise of totalitarianism in the twentieth century.

Arendt studied under German philosophers Martin Heidegger and Karl Jaspers and set out to pursue a path as an academic, writing a dissertation on St. Augustine. However, Hitler, the Nazi regime’s rise to power, and the bloody Holocaust forever changed her life. Being Jewish, Arendt was forced to flee the country, seeking refuge in France and eventually the United States. After living through the outbreak of WWII, Arendt devoted the rest of her life to writing about politics, although less in a traditional philosophical sense and more in the vein of a political observer, interpreting events of the twentieth century.

This essay explains some central insights of her political thought and how she developed these concepts to overcome the loss of politics as public debate in Nazi Germany. 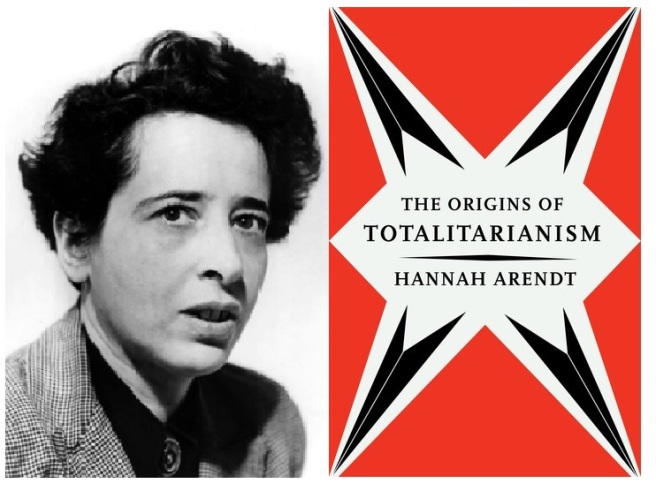 1. Totalitarianism and the Loss of Public Debate

Arendt understands “politics” as public debate by a community about meaningful aspects of their shared life together. She witnessed the collapse of politics, in this sense, under Nazi totalitarianism. This form of rule seeks to diminish public debate by making it a criminal act to criticize the regime. Arendt sought to understand the rise of this unprecedented form of government, and to defend public debate against threats to its existence.

Throughout her writings Arendt defended the importance of public debate. She had witnessed with German citizens in the 1930’s and 40’s what could happen in its absence: the substitution of a fabricated reality based on a leader’s vision, accepted by seemingly well-intentioned citizens. Without public debate, the ruling regime is free to construct a false narrative about “reality,” perpetuate that narrative, and maintain power because there is nothing to compete with it.

2. “The Human Condition” and Plurality

Arendt’s well-known 1958 text The Human Condition contains some of her central insights about politics, especially her concept of human plurality. For Arendt, plurality is an existential condition of human life: we are equal insofar as we are human beings but distinct because no human being is like any other. Our distinctness provides us with a perspective that cannot be fully understood by anyone else, yet our equality means that, as a presupposition of communication, we assume the capacity for speech and reason in each other.

How does Arendt argue we preserve the public space?

The answer lies in how Arendt rethinks the concept of power. As a political concept, we often associate power with rulers, governments, and politicians. Rulers or politicians have or hold power, as if power is something to be possessed. We often hear the phrase that politicians are not concerned about their constituents but about “staying in power.”

Arendt, however, considers legitimate power as something that exists between citizens as they engage in political action together, whereas power wielded by rulers through the use of terror and violence is illegitimate. She argues that  “power springs up between men when they act together and vanishes the moment they disperse.”[1] So, when a group of human beings decides to act for a specific political purpose, power exists between them as they collaborate together to achieve a political aim: we might say that it is power that “holds them together” as a group and not just a collection of disparate individuals.[2]

Reclaiming the public space of debate is an effective mechanism for citizens when they believe a government has lost its legitimacy. Robust public debate in many forms ensures that it is not merely the ruling regime that defines the parameters of public debate, especially if they attempt to drown out dissent as, for example, in the delegitimization of the media or press. Public debate competes with political leaders’ attempts to substitute fabricated truths in order to maintain power.

In sum, the public space is preserved through power that “springs up” among citizens when they gather together. Public space refers to the activity of shared debate among plural human beings; this space and activity are maintained as long as opportunities exist for the gathering of citizens.[4]

Arendt’s political thought is unique among political thinkers because it does not lay out a theoretical program like a social contract or theory of justice. Instead, Arendt’s political thought is existential in attempting to understand how a meaningful space for politics and public debate can be lost and how that space might be re-enlivened through political action. Current political circumstances, especially the rise of nationalist and populist movements across the globe, speak to the importance of robust public debate among citizens.

[2] Arendt’s insight, that power holds a group together, is fairly intuitive. Any group of people that decide to achieve some common goal must work together and not be at cross purposes. Being in agreement and working together means the group has power between them, but if they quarrel and pursue separate projects, there is no longer power present.

[4] Twentieth-century German thinker Jurgen Habermas is close to Arendt in his thinking on the public space or public sphere, especially in his insistence upon undistorted forms of speech and communication. His thought is that public debate can proceed through what he calls “the force of the better argument.” Habermas, as well as Rawls, is generally associated with a school of political thought known as deliberative democracy, where the emphasis upon public debate is essential. Aspects of Arendt’s thought can be considered to belong to this school of thought.  However, their accounts of the public sphere (in the case of Habermas) or public reason (in the case of Rawls) belong to more idealist strains of political theory whereas Arendt’s political thinking has a different starting point.

Introduction to Existentialism by Addison Ellis

Ethics and the Expected Consequences of Voting by Thomas Metcalf

David Antonini received his PhD from Southern Illinois University Carbondale in 2018. His dissertation is about Hannah Arendt’s political thought, specifically her concept of the public space. He is currently a lecturer in philosophy at Clemson University in the department of Philosophy and Religious Studies. https://davidantonini.wordpress.com